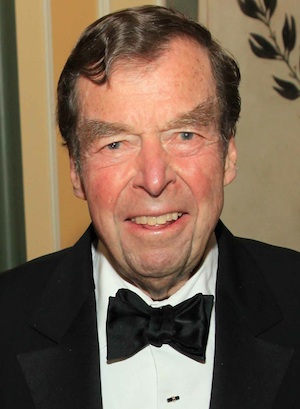 School vouchers never had a better friend than Peter Flanigan. It was not Peter’s direct philanthropic contributions. Although he gave generously from the wealth accumulated as an investment banker, others—such as the late John Walton—drew upon deeper pockets to donate more to the common cause. Nor was Peter a theoretician who could expound the case for vouchers with Friedman-like brilliance. What Peter brought to the table—early and late—was essential goodness, deep conviction, unwavering integrity softened by a gentle kindness of the sort not always found on Wall Street, and, not least, a tough mind sharpened by common sense.

In 1986, well before the first voucher program, Peter founded Student Sponsor Partners (SSP), a scholarship program for disadvantaged students at risk of dropping out of public school. SSP not only enabled recipients to attend Catholic schools, but donors were expected to mentor their students as well as contribute money. SSP remained Peter’s central philanthropic focus to the end of his life, as it twinned a Catholic education with personal responsibility—on the part of both donor and recipient. Though the program differed from vouchers in that students were selected and all participating schools were Catholic, its essence—creating new opportunities for disadvantaged students by giving them access to private schools—inspired the voucher movement.

In 1996, a new philanthropic opportunity developed. The impetus was an invitation issued by Cardinal John J. O’Connor, Archbishop of New York, to Rudy Crew, Chancellor of the New York City public school system, to “send the city’s most troubled public school students to Catholic schools” and he would see that they were given an education. When New York City Mayor Rudolph Giuliani attempted to raise the funds that would allow Catholic schools to fulfill the offer made by the Cardinal and enroll the “most troubled” students, his proposal encountered strong opposition from those who saw it as a violation of the First Amendment’s establishment clause. As the controversy raged, Peter brought together a group of Wall Street philanthropists who established the School Choice Scholarships Foundation (SCSF). In the fall of 1996, SCSF announced it would cover a portion of the costs of the private education of 1,000 students who would otherwise be attending public school.

Only Peter could have married the various groups together that were necessary for this venture to succeed. Up and down Wall Street, Peter’s personal integrity and commitment to community service were beyond question. Given his outstanding support for the highly successful SSP program, Peter’s standing with the Catholic archdiocese was, if anything, even higher. All that remained was working out the specifics of the SCSF program.

It was in this context that I first met Peter Flanigan. In November 1996, Joseph Viteritti, now a professor at Hunter College, invited me to participate in a meeting of policy experts called to advise SCSF on program design. Joe thought I should participate in the discussion because Jay Greene (then a student of mine and today a professor at the University of Arkansas) and I had found beneficial impacts of a small voucher program in Milwaukee, Wisconsin, and Joe thought we might want to consider an evaluation of the SCSF program as well.

Peter was the only philanthropist in the room, so his word was pretty much the last word. We soon agreed on certain features of the program that were to become standard for the voucher movement more generally. Eligible students should be limited to those from low-income families. Only public school students could apply, except for those applying for a first-grade spot. In response to concerns expressed by the archdiocese, the program was limited to students entering grades one through five. Students would have their choice of private school, religious or secular. A major advertising campaign would be conducted to maximize the number of applicants so as to underline the demand for school vouchers within urban communities. From the large number of applicants, 1,000 students would be randomly selected to receive the offer of a scholarship. (Later, that was changed to 1,000 families, lifting the numbers of students substantially.)

At the meeting there was one major controversy which placed me in direct conflict with Peter Flanigan. Peter conceived of the program as a philanthropic opportunity—a chance to help many more young people gain access to Catholic and other private schools. I thought of it as an opportunity to test, once and for all, the effectiveness of school vouchers as a school reform policy. Since a lottery was being conducted, it would be possible to compare outcomes for two randomly selected groups of students: those who won the lottery and were offered a scholarship compared to those who applied for a scholarship but did not win the lottery. If lottery winners learned more than losers, the effectiveness of the voucher initiative would be clearly established and the voucher movement could use this information to convince skeptics.

Besides, the chance to do a randomized field trial is a scholar’s dream ticket. Here was my chance.

Only Peter stood in the way. Various thoughts undoubtedly crossed his mind. This guy’s from Harvard—I’ve heard of that place. This guy’s not Catholic—what does he really think about Catholic schools? This guy talks a good game, but can he really be trusted?

We compromised, probably because Joe Viteritti, a person Peter knew he could trust, lent his support to the idea. Peter agreed to bring the idea of a program evaluation to the scholarship board—as long as it did not cost SCSF a dime. Raising money for the evaluation was my responsibility, not his. SCSF money was going exclusively for scholarships for kids so they could get a good education.

Just exactly how the evaluation got funded and implemented, despite the many problems and pitfalls en route, is a tale to be told on another occasion. But Peter, once he gave his word, never wavered in his support throughout the crises that occurred downstream.

Our research did not show everything Peter had hoped it would. We found large benefits to the test score performance of African Americans but not for those from other backgrounds. Our research—and our reputation–was bitterly attacked by voucher opponents. It would have been easy for Peter to have walked away—not from his commitment to Catholic education or to vouchers—but from academic squabbling that sometimes seemed to do more to get in the way of progress than to propel it forward.

I am grateful that Peter instead remained a loyal supporter of Harvard’s Program on Education Policy and Governance (PEPG) and of Education Next. It was at his urging that the John M. Olin Foundation gave both the program and the journal early support when both entities were getting their feet on the ground. When Peter agreed to serve on the PEPG advisory committee, he took the job seriously, never failing to give vigorous advice and trenchant commentary. A couple of years ago, at the last meeting Peter attended, he listened to a presentation on the dire state of federalism in the United States. “O.K., Paul,” I remember him saying, “I suppose that’s a fine study, but I thought our job was to fix schools. What does this project have to do with education.” Gulping, I explained I had always been a federalism scholar and recent bankruptcy crises had captured my attention. Looking at his raised eyebrows, I dug deeper: “Besides, one third of state and local expenditure is for education, and all the money going into pensions and medical care for retired superintendents is coming at the cost of today’s students.” Peter, a kind man, relaxed, probably not altogether satisfied but at least less alarmed.

It was a special privilege, only a few months later, that I was able to share privately with Peter the soon-to-be-released results of our most recent study of the New York City voucher program he had instigated. Because of his efforts, I was able to tell him, the college-going rate of African American voucher recipients had increased by 24 percent. Peter was pleased but hardly shocked.

Thank you, Peter. We shall long remember your friendship.